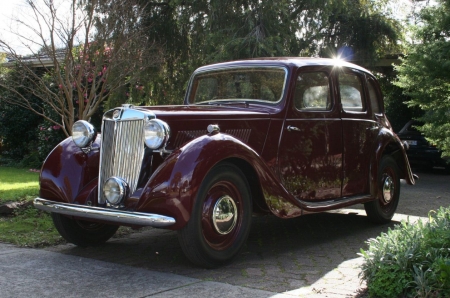 “The previous owner had done some work on the chassis but, when they got to the badly rusted bodywork around the boot, I suspect it got too hard. Fortunately, I have a friend, Andrew Hitchcock, who’s a skilled panel beater and he rebuilt the back from the boot-lid down. Once the body was repaired, it was refinished from the bare metal up using Protec products. The final coat is Protec 606 Paraglaze Acrylic Urethane Enamel mixed to the original MG Maroon colour formulation at Protec Thornbury.”

Despite being designed in the late 1930s, Neil says the car has some quite advanced features for the era, perhaps due to the contribution from legendary engineer, Sir Alec Issigonis, who would later design the Mini. Highlights include independent front suspension, rack and pinion steering and an inbuilt ‘Jackall’ system which lifts the car completely off the ground to allow the wheels to be removed. The internet became Neil’s friend as he searched for hard to find parts, such as the unique diff centre, wooden trim sections and seals to rebuild the rams for the Jackall system. Neil has been restoring cars for 36 years (his current stable includes a 1969 MGB and a 1968 Riley Elf which he’s working on) and, when it comes to a project like this, he reckons the journey is as important as the destination.

“The finished product is great but I really enjoy the restoration challenge. I’ve met a lot of people throughout the process and have developed friendships that will continue. It may not be the best car to drive – it’s a 1949 model after all – but I’m really happy with it and most people say it looks gorgeous!”